Skip to content
The city of Malaga in Andalusia, Spain, is a perfect location for a long weekend away. Here’s a suggested itinerary for a three day weekend in Malaga 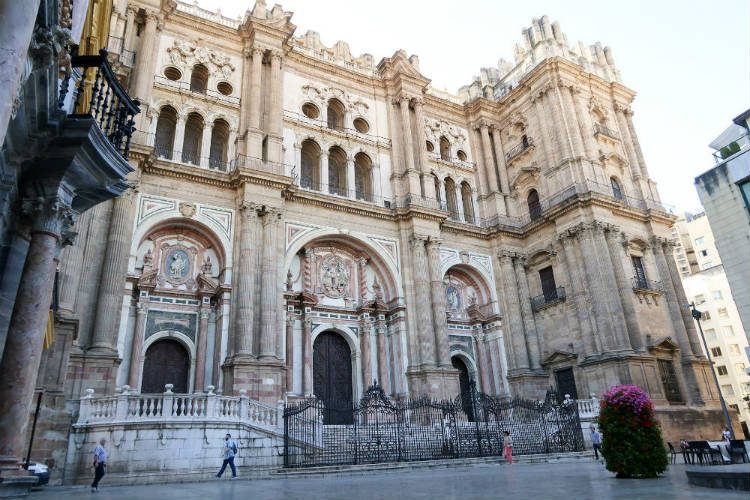 Updated 31st May 2018 I’d never really thought of visiting Malaga until recently. But after one weekend, I came home knowing that it won’t be long til I visit again. I didn’t really know what to expect from the city, and certainly didn’t expect to love it as much as I did! But then there’s a lot to love about Malaga. The weather was stunning throughout my visit, and the city gets over 300 days of sunshine per year. Temperatures average around 25C throughout the year, and there’s a cooling sea breeze. The architecture is beautiful, and you’re bound to find plenty to keep you entertained throughout your visit. Here’s how I spent a long weekend in Malaga: 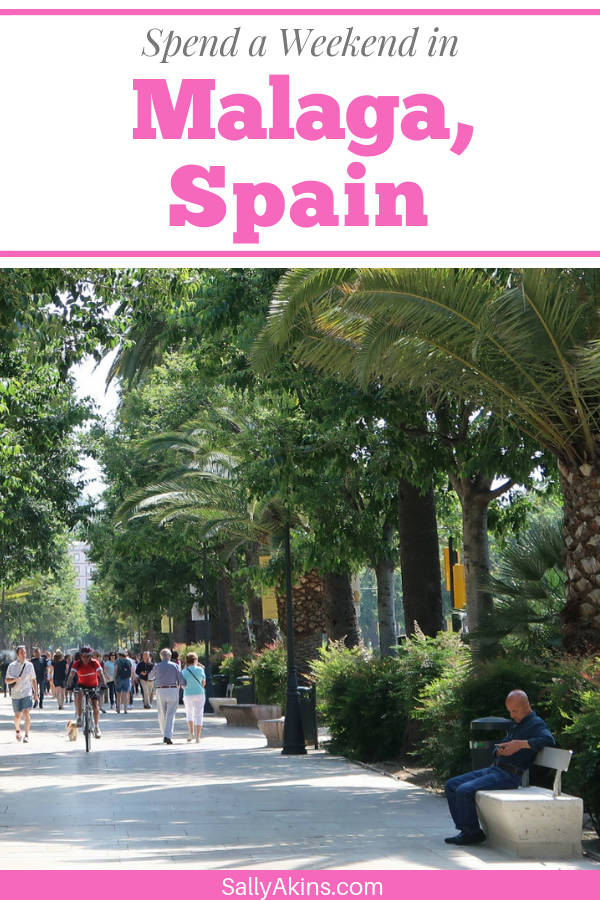 We flew in on Friday evening and collected our hire car, which was kindly provided for us by Holiday Autos. It was after 9pm, so we headed into the city and collected the keys to our apartment. I had booked a studio apartment through Apartamentos las Flores, and they didn’t let us down. We had a small studio apartment right in the very middle of the city, literally a few minutes walk from all of the major sights. It was clean and bright, with free wifi, air-con and a small terrace area. The bathroom and kitchen looked clean and modern, and there was even a washing machine provided. I’d have been very happy to stay there for longer than the 3 nights we had booked. The centre of town was still bustling at midnight, and we took a quick wander around. I was absolutely amazed when I saw the cathedral so beautifully lit up at night. It’s a stunning piece of architecture, known as the One Armed Lady because the second tower remains unfinished. As the cathedral clock struck one o’clock, we went to get some sleep before our trip to Alhambra. 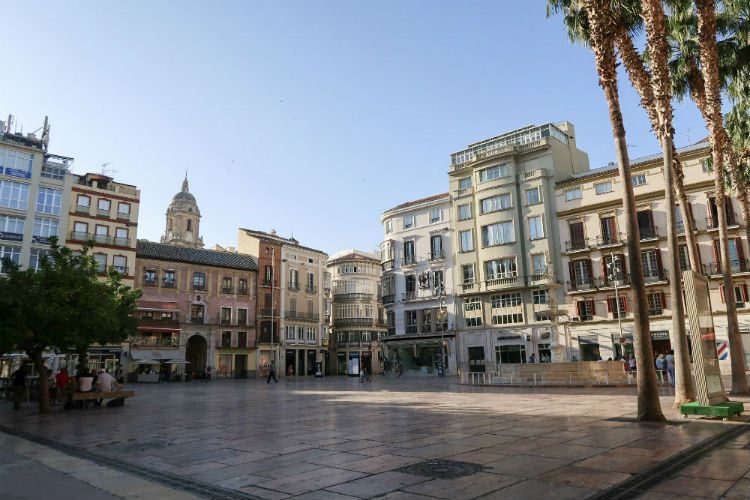 The next morning we took a short stroll to Plaza de la Constitucion, one of Malaga’s main squares. We ate a breakfast of freshly baked bread and garlicky Malaga sausage, before heading off for our trip to Alhambra. I’ll be covering all of the place we ate in Malaga in a later post. The drive to the Alhambra takes around 90 minutes from Malaga, and it’s very straight forward indeed. We could have added a GPS to our rental car to help with directions. But luckily Three had loaned me a shiny new Samsung Galaxy S8+ to take with me Spain. Their ‘Feel at Home’ scheme means you can use your UK data allowance while you are overseas. So I just used Google Maps to find the route  to Grenada.

Click here to read my full review of the Samsung Galaxy S8+.

We drove through stunning scenery, with the dramatic backdrop of the Sierra Nevada mountains. Finally we reached our destination. 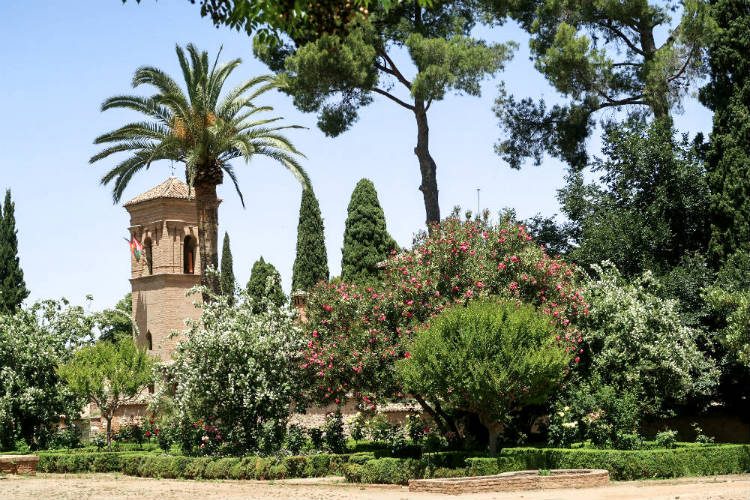 The Alhambra is a large palace and fortress complex near Granada, in Andalusia. Construction originally began in the year 889, and the main Nasrid palace was built in the mid 1200s by the Moorish emir Mohammed ben Al-Ahmar. There’s also another palace on the site, which was built during the Renaissance in the reign of King Charles V. We spent several hours exploring the Nasrid palace with its beautiful Islamic architecture. There are intricately carved ceilings, and amazing patterned tile work covering the walls. 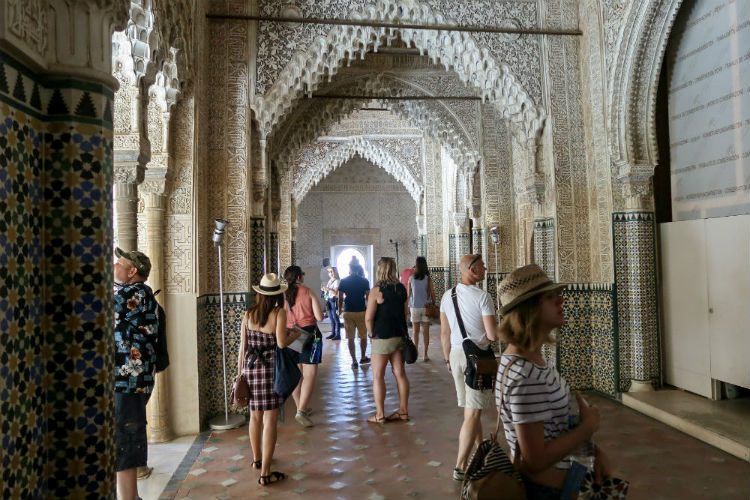 Although it was a very hot and sunny day, I didn’t find the heat too uncomfortable because the Nasrid palace has many beautiful courtyards. So you’re never too far away from a cool shady place to rest and admire the surroundings. 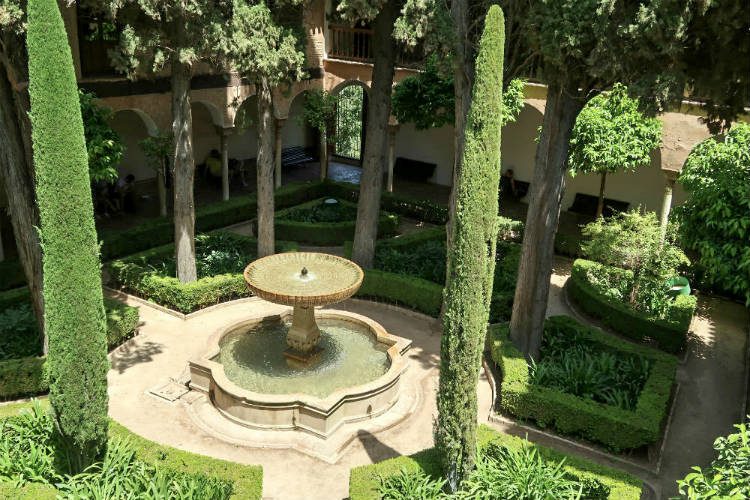 After driving back to Malaga, I was both looking forward to an evening out in the city. As you might expect, Malaga has a wide choice of restaurants and tapas bars. We opted for one of the restaurants in the square by the cathedral, but unfortunately the paella we ate was decidedly average. It was probably my own fault for not doing a bit of online research before we went out to eat. The city also has a good selection of bars, so we decided to go for a couple of drinks. If you’ve had a gin and tonic in Spain, you’ll know that they tend to be fairly generous on the gin! After all the walking earlier in the day, and a couple of gin and tonics, I was definitely going to sleep well!

After a fairly active day at the Alhambra, I was ready for a more relaxing day on the Sunday. So we started the day with a breakfast of churros and hot chocolate, and then set off for a stroll around the city. There were a lot of shops and restaurants open on Sunday morning, which I found quite surprising. Somehow I’d expected to find more shops to be closed. Next we headed over to the Parque de Malaga, the main park in the city centre. It’s a huge city park full of amazing botanical specimens, some of which are over 100 years old. You can spot parrots and hear them call to each other as they fly in and out of the many tropical trees. 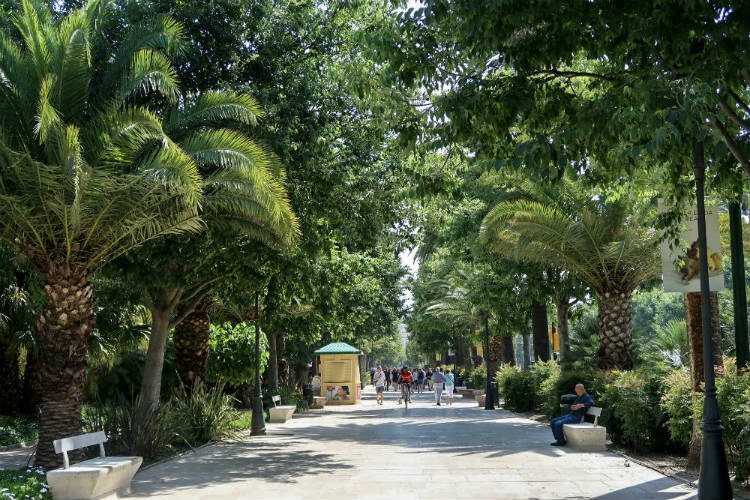 The park is a beautiful place to relax and if you struggle in the afternoon heat, then you’ll love the shady walkways. Small stalls along one of the paths were selling artwork, embroidered shawls and tableware, and even hand-painted cast iron frying pans. 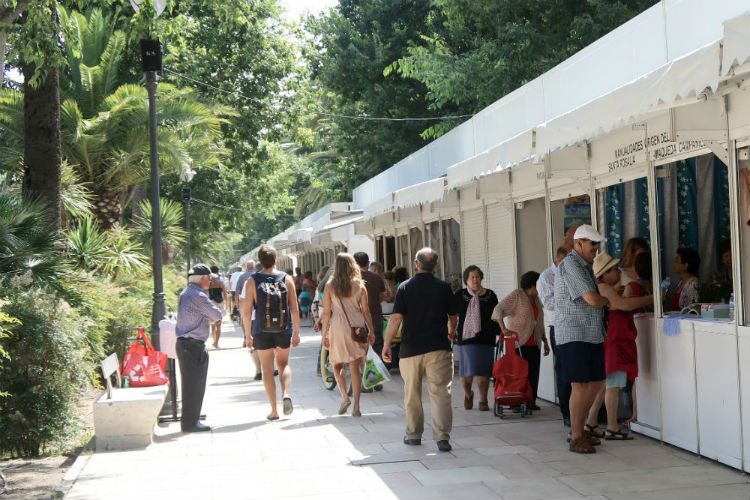 From the Parque de Malaga, we crossed over to walk along the seafront. A couple of cruise liners were docked in the port, and the marina was full of smaller ships and boats. I thought this yacht looked quite impressive, it must have cost a fair amount! 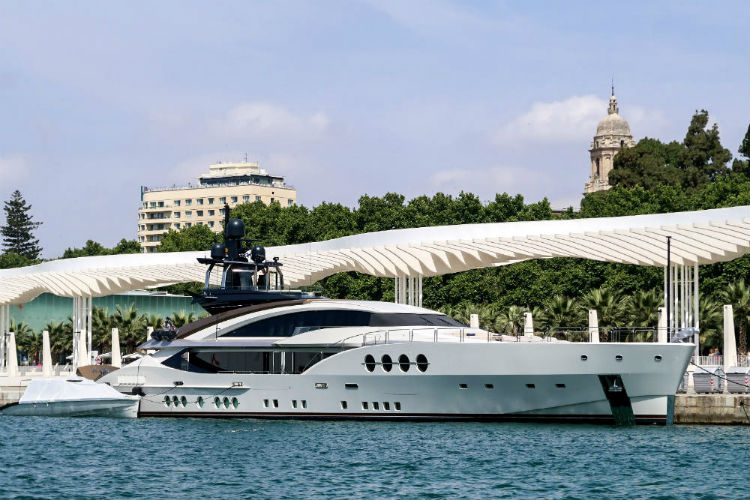 We ate a delicious tapas lunch at one of the restaurants in the marina, and then took a stroll along the beach. The beach is fairly long and wide, with plenty of shade and showers dotted around. It’d be a lovely place to spend a few hours. So we decided to stop off at one of the bars on the beach for a drink before heading back for a siesta. 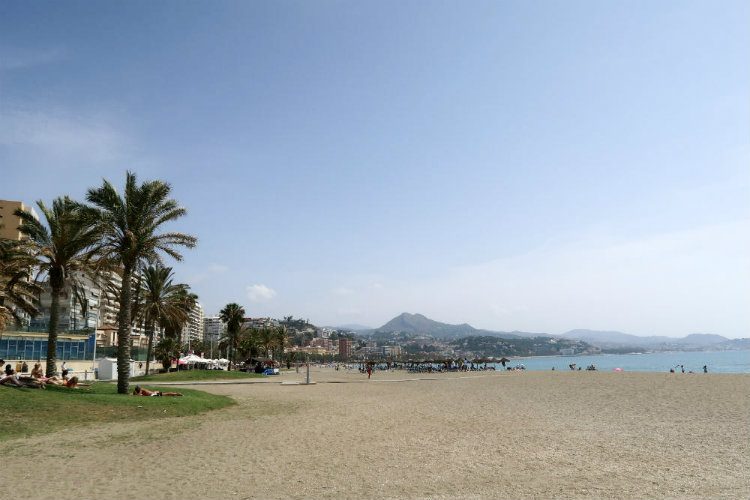 I decided to go out for a wander on my own and soon found a lovely little restaurant to eat in. There’s a good selection of restaurants in Malaga, serving everything from local cuisine and tapas, to pizzas, Indian food, and even a halal restaurant. I may have been dining alone, but I definitely didn’t feel lonely. I love indulging in a bit of people watching, and the waiters at the restaurant kept me entertained throughout my meal! After a coffee and a complementary liqueur, I decided to get an ice cream before heading back to the apartment.

Before breakfast, I headed out into the city to get some early morning photos. At 8am, Malaga looked wonderful in the cool morning light. It was fantastic to be able to take photos without the usual crowds of people around the city. I reckon it’s definitely worth heading out a little earlier for that. 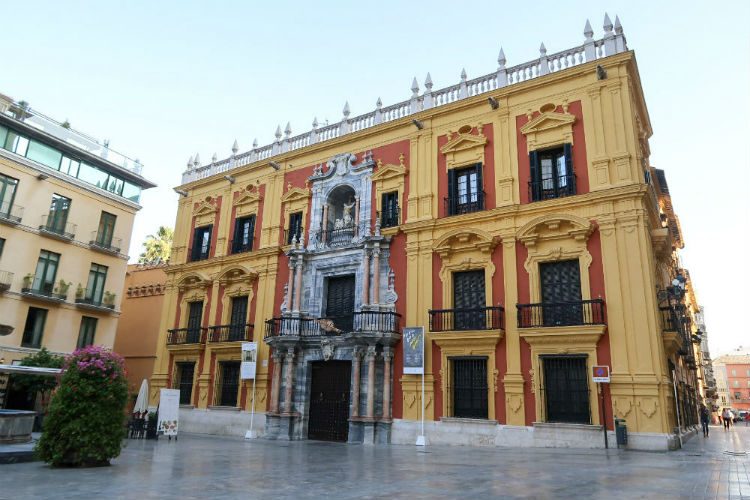 In the evening, there are restaurant tables set up outside the Episcopal Palace. It looks more dramatic lit up at night, but I loved seeing it in the cool morning light as well. Malaga is a city of contrasts. It feels very closely built up in the centre, with lots of tiny alleyways like this one below. But there is plenty of space to relax in when you go to the park and marina areas. 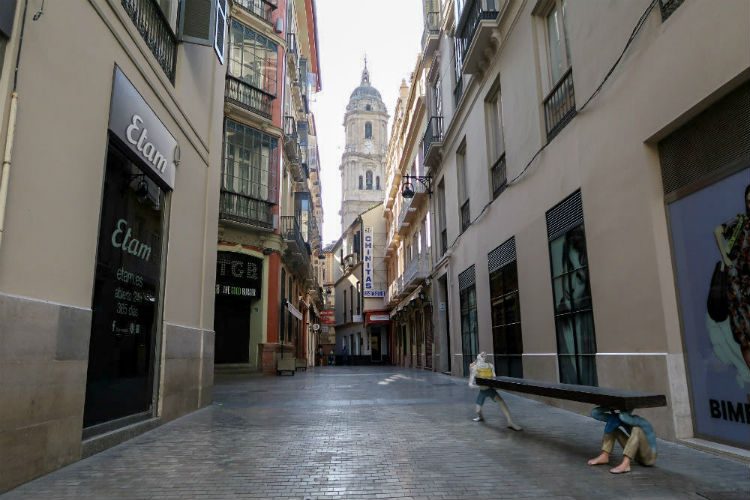 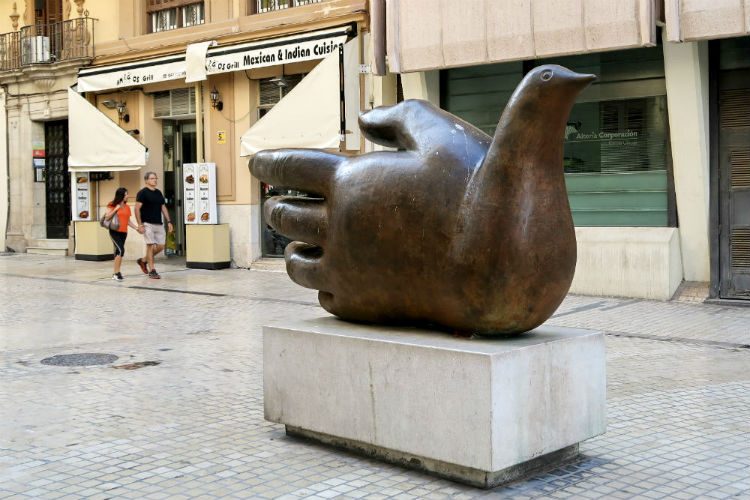 A little later, I went for breakfast in the square again, and lingered over an extra coffee as the city grew busier. Then I still had a little longer before I needed to head to the airport. That gave enough time to wander over to the marina again, and enjoy the sunshine. I fell in love with Malaga while I was there, and I know that I’ll definitely be heading back to the city before too long. Malaga might not be as big as Madrid or as fashionable as Barcelona. But it’s definitely a destination that I would recommend without any hesitation. There were so many things that I could have done in Malaga, if we’d had a little more time. We could have visited the Alcazabar, seen the Roman ampitheatre, or gone to the Pablo Picasso museum. Next time…

One thought on “How to spend Three Days in Malaga, Spain”