The German city of Nuremberg has many local specialities. Here are some of the best food and drink to try when you visit the city.

I visited Nuremberg as a guest of Tourismus Nürnberg

Whenever I visit a new city, the food and drink are some of the main attractions for me. I absolutely love researching the regional specialities, finding the best places to eat out, and of course, actually sampling the produce.

So when I was invited to visit Nuremberg in Germany for the first time, I knew that this was definitely going to be a focus for my trip.

I love German cuisine, so a lot of my weekend centred around what I was going to eat next, and the best place to eat it. And the city certainly didn’t let me down!

Two days doesn’t give you a huge amount of time to fit in a lot of different places to eat. But I did my best to try as much as possible so that you can spend more time eating when you visit the city. 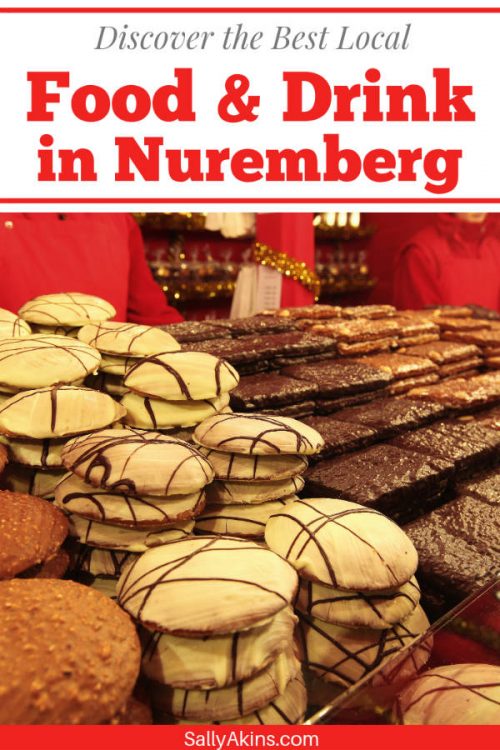 Here are five foods and drinks that you really must try when you visit Nuremberg! 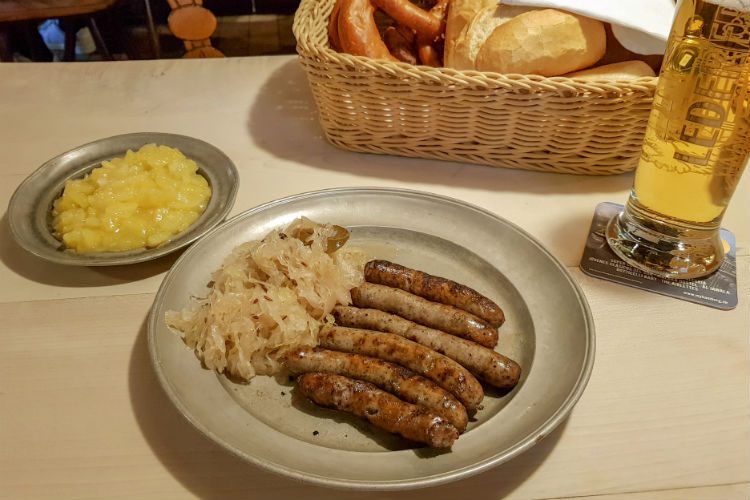 Unless you’re not a meat-eater, you really can’t go to Nuremberg without trying the famous Nuremberg sausage. And if you’re anything like me, you’ll probably manage to snaffle quite a few over the course of your visit!

German cuisine is generally famous for its sausages, of course, but these are quite unlike the Wurst that you might have tried elsewhere. Nuremberg Bratwurst are skinny little sausages, and tradition says that they had to be slender enough to be passed through the keyhole of the city gates after they were locked at curfew.

But what these sausages might lack in girth, they make up for in sheer tastiness. These bratwurst are packed full of flavour and slightly spicy, with marjoram lightening the overall effect. Don’t think of putting tomato ketchup on them, stick to the mustard that you’ll usually find served alongside.

You might feel a bit of a little piggy yourself, when you see the menus offering sausages in quantities of 6, 8, 12 or even 15. But just go with the flow – if you only order 6, you’re sure to wish you’d ordered more by the time your meal is over.

And ‘drei im Weggla‘ – three in a bun – is the perfect snack on the move. 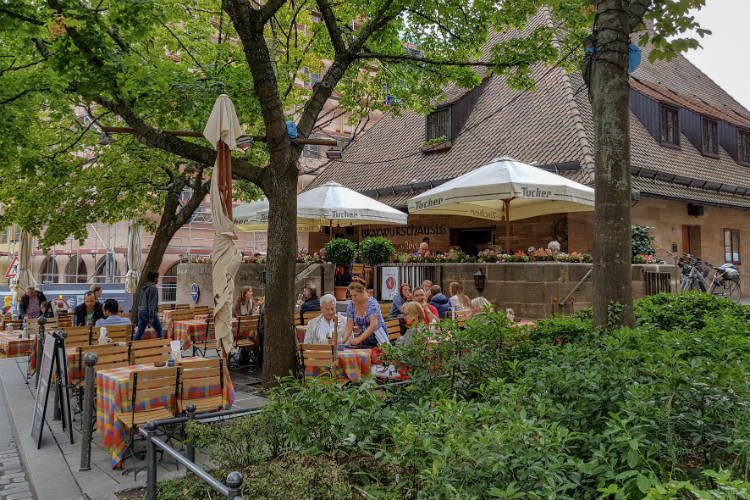 I had my first taste of the Nuremberg sausages at the Behringer’s Bratwursthäusle restaurant which is just around the corner from St Sebaldus church. You can either eat inside or sit outside on the terrace and people watch while you eat.

You could also try Behringer’s Bratwurstglöcklein, which you’ll find in the Handwerkerhof. 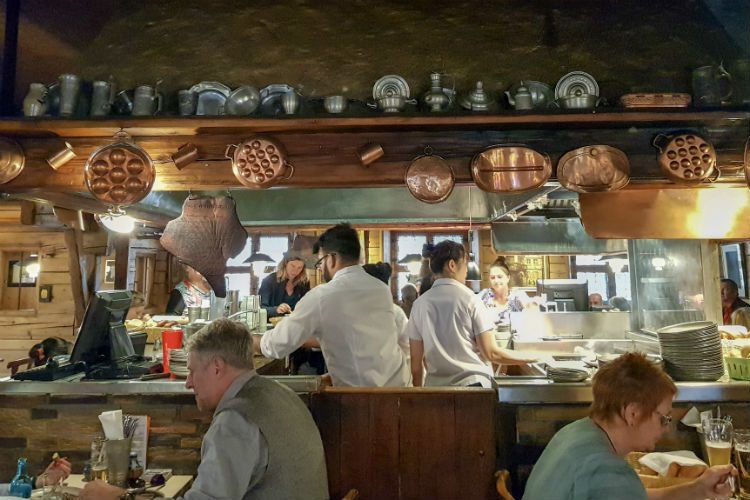 Behringer’s Bratwursthäusle is a traditional style restaurant where you can watch the sausages being roasted on the grill.

I ordered a modest plate of 6 sausages which arrived on a bed of sauerkraut, served on a traditional pewter plate. I also ordered the bread basket and potato salad alongside, but I’d go for more sausages rather than the potato salad next time!

This restaurant also serves ‘drei im Weggla’ to go – you queue up to place your order at a serving hatch just inside the restaurant door. 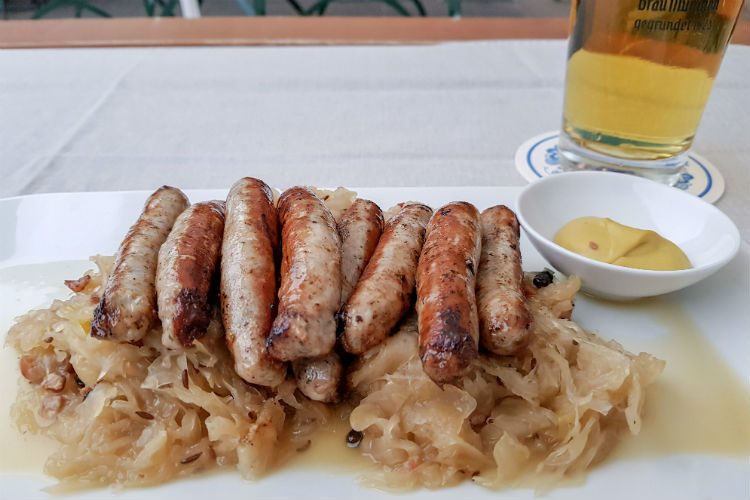 Again the sausages were served on a bed of sauerkraut and with mustard alongside. But this time the fermented cabbage was combined with pieces of bacon and various spices. With a glass of ice cold lager, it really was a delicious meal! 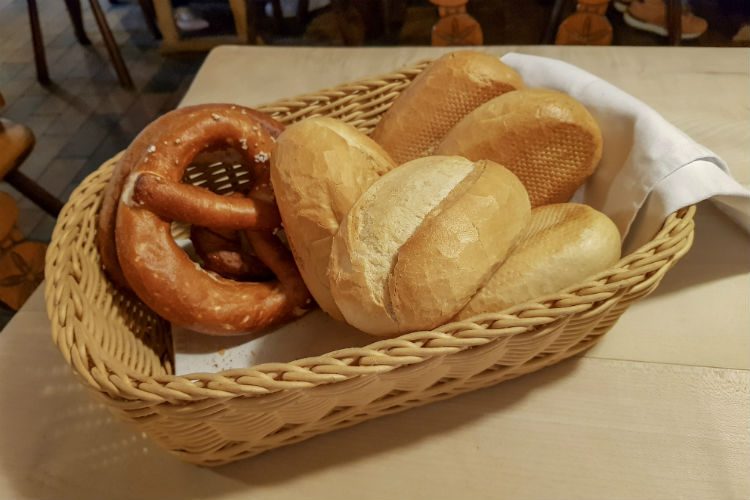 Another great snack to keep you going while you explore Nuremberg’s Old Town is the traditional Nuremberg Brezel.

Yes, it’s essentially a pretzel, but it’s so much better than the pretzels that I’ve tried in the UK. Soft, chewy and very delicious, I tried the traditional Brezel which is fleckled on top with flakes of sea salt at Behringer’s Bratwursthäusle.

But you can also try a Brezel as a sandwich, split and stuffed with various sweet or savoury fillings. They’re great as a snack on the move as you walk around the city.

You can pick up a Brezel from various stands around the city, from the airport and train station, to the main streets of the Old Town. Or head to Brezen Kolb‘s main shop on Karolinenstrasse, for a great selection of varieties.

As well as sausages, Germany is famous for its beer. And Nuremberg has its own local speciality – red beer, or Rotbier.

The city’s council passed a rule in the early 14th century, stating that only barley malt could be used in brewing. This ‘purity law’ helped to form the basis of Nuremberg’s beer history, and brewing has been an important part of the city since then.

Rotbier is brewed slowly and at low temperatures, a process known as bottom-fermentation as the yeast sinks down during fermentation. This gives a darker beer, with a malty aftertaste

Now, here I have to confess that I didn’t taste the Rotbier on my first visit to Nuremberg. I’m a fan of German lager, and I found that too hard to resist when I was eating out.

If you want to try the traditional Nuremberg Rotbier when you visit Nuremberg, there’s no better place to go than the Hausbrauerei Altstadthof where they have brewed the beer for centuries.

And if you would like to know more about the beer, then why not take one of the tours of Nuremberg’s rock-cut Deep Cellars. These tours are a great way to learn more about Nuremberg’s traditional brewing. And of course they end with a beer tasting as well.

By the way, this tour is included in the Nuremberg City Card. The card covers entry into many of the city’s attractions and travel on the public transport system for two consecutive days. Click here to find out more about the Nürnberg card, and how it can save you money on your visit to Nuremberg. 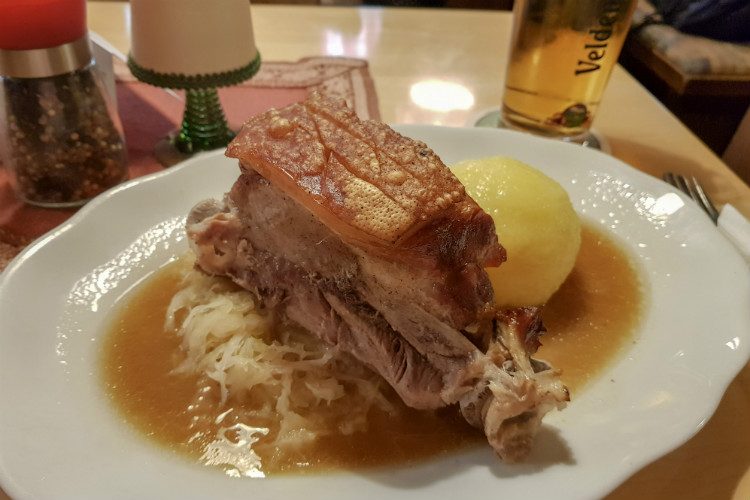 This was absolutely my favourite dish out of everything that I ate on my first visit to Nuremberg.

Schäufele basically means the shoulder, and that’s exactly where this cut of pork comes from. It is regularly basted as it slow roasts in a stock with herbs and vegetables. When it’s ready, the meat is so tender that it almost falls off the bone.

Then the joint is blasted under a hot grill so that you get perfect crackling to contrast with the soft, sweet meat. It’s then served on a bed of sauerkraut with the thickened stock surrounding it. And maybe a dumpling to help mop up that sauce.

It’s incredibly good, and definitely the dish that I dream of eating again when I think of visiting Nuremberg next time! 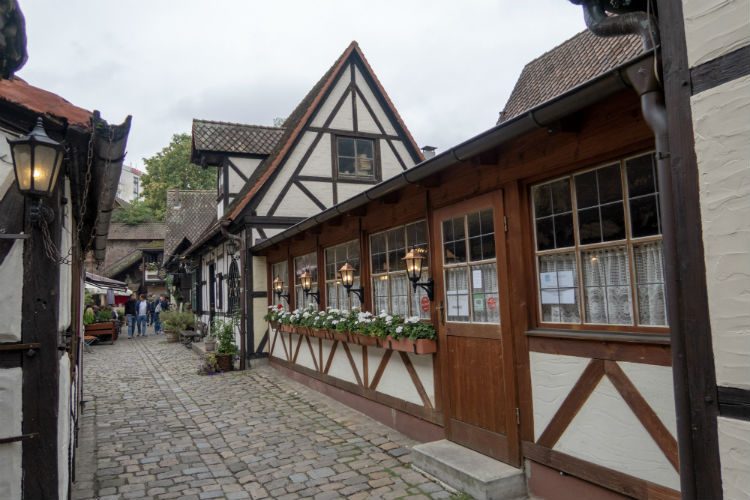 You’ll find Schäufele on the menu in many restaurants in Nuremberg. Your main problem may be finding one that hasn’t already sold out by the time you get there.

The Fränkische Weinstube in the Handwerkerhof also said they were sold out when I first asked. But then they checked again in the kitchen and found that there was one single portion left! 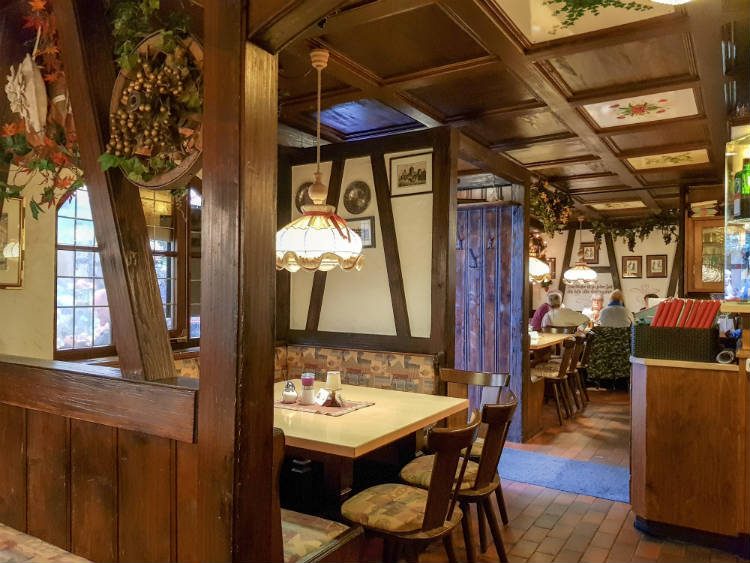 This is a lovely restaurant which was clearly popular with the locals. I always think that’s a good sign of a restaurant worth trying.

The Schäufele was incredibly tender, full of flavour, and that crackling was some of the best I’ve ever had. Don’t be deceived by this cut of meat – it may not look big when it’s first brought to your table, but there’s more meat on the shoulder than you might imagine.

I struggled to finish my portion, and even had to take a little break in the middle. But it all tasted so good, I didn’t want to leave a single morsel of it!

My final pick for this selection is probably the one that most people associate with Nuremberg. The city is very famous for its big Christmas market, and also for its Lebkuchen which is similar to gingerbread.

This delicacy was first baked by the Frankonian monks in the 14th century, when the city was located on important spice and trading routes. Now Lebkuchen is associated with Christmas across Germany and far beyond.

Can you eat it all year around? I can’t think of any reason why not!

You may have tried Lebkuchen at home, as it’s often available in supermarkets in the run up to Christmas. But the Lebkuchen I tasted over in Nuremberg certainly seemed to be more tender, and more flavourful than anything I’ve picked up with my weekly groceries in the UK!

It comes in various shapes and with lots of different toppings. So that’s a great reason to try them all and discover your favourites. They come in beautifully decorated tins, which would make a great Christmas gift – if they last that long!

My advice to you is to buy more than you think you will need. Once you’re back in the UK, you’re bound to be tempted to just open up one tin… 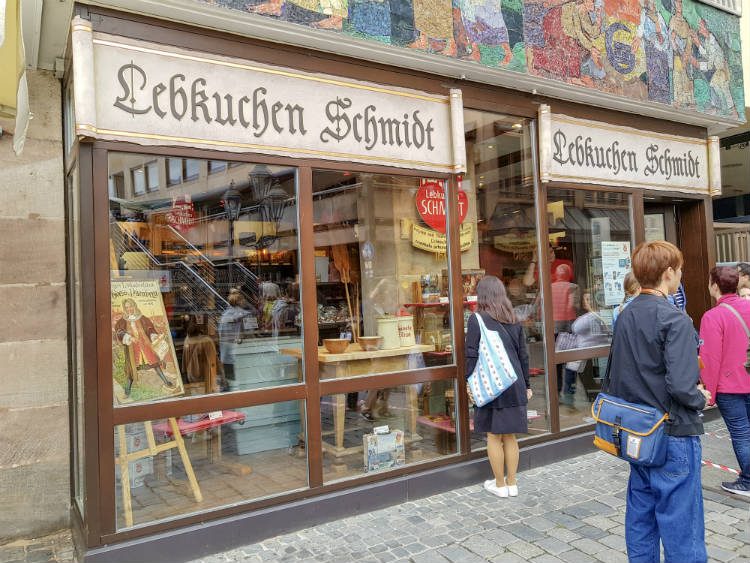 If you want to buy some Lebkuchen in Nuremberg, then you have to visit Lebkuchen Schmidt. They’re famous for baking this regional delicacy, which is recognised in Europe as a “protected geographical indication”.

They have a charming shop packed full of tins of Lebkuchen and other gifts. Or if you prefer you can buy from their stall in the Hauptmarkt, where the sellers entertain the crowds of customers as they browse. 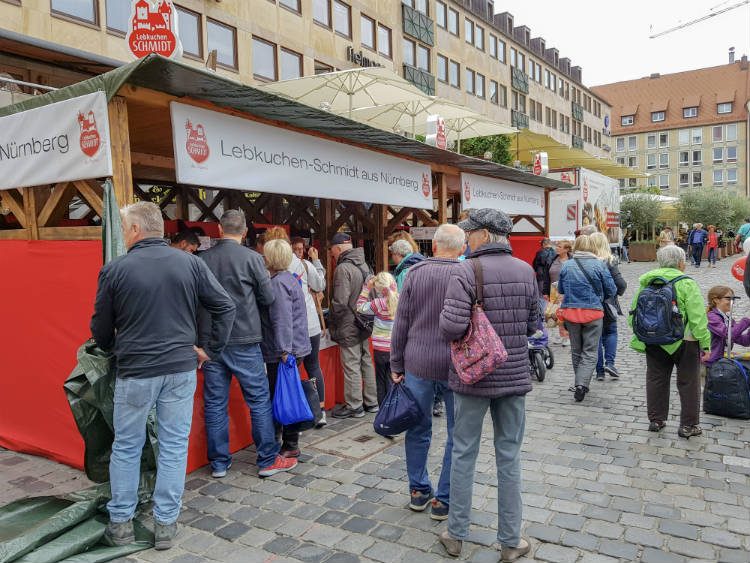 But if you are visiting Nuremberg for the weekend, be sure to stock up on your Lebkuchen before the shop and stall close on Saturday afternoon. Like many of the shops in Nuremberg, they don’t open on Sundays!

I really loved trying the local produce when I visited Nuremberg. In fact my main problem was that I just ran out of time to try everything that I wanted to.

And that’s a great reason to start planning another visit!

Have you visited Nuremberg? What was your favourite thing to eat or drink there?

11 thoughts on “A Taste of Nuremberg: Local Food and Drink You Need to Try”