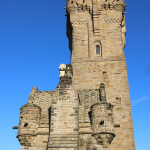 Find out all about visiting one of Scotland’s most recognisable landmarks, the National Wallace Monument near Stirling.

The National Wallace Monument is one of the most famous and recognisable landmarks in Scotland. You may well have seen photographs of the 67 metre tall monument towering over the Stirling landscape.

It only takes a couple of hours to look around the Monument, so it’s the perfect way to spend a morning or afternoon while you’re in the area.

More than 100,000 people visit the National Wallace Monument each year. Last November Mark and I paid a visit on our way up to the Four Seasons hotel by Loch Earn.

Read on for all the most important National Wallace Monument facts, including how to get there, the best time to visit, and how to handle the Monument’s 246 stone steps.

How to Get to the National Wallace Monument, Stirling

If you’re visiting Glasgow or Edinburgh, the National Wallace Monument is perfectly located for a day trip, and very easy to reach by car.

If you want to visit the National Wallace Monument by public transport, the nearest train station is at Stirling. From there, you could take a taxi to the Monument itself.

What to wear to visit the National Wallace Monument

The Monument sits on the top of a hill, and has 246 steps from the entrance to the Crown Spire. So it’s definitely a good idea to wear comfortable footwear for all that walking.

And if you’re visiting in Winter, you will definitely need to wrap up warm. The temperature was a chilly -6C when we visited in late November!

Who was William Wallace?

William Wallace was a Scottish Knight who became one of the great heroes of Scottish history. You’ll find tributes to him all over the country.

He became one of the main leaders during the First War of Scottish Independence which started at the end of the 13th century.

In 1297, Wallace lead the Scottish army to victory at the Battle of Stirling Bridge, despite being outnumbered. This was one of the first major battles of the war, and a major defeat for the English.

After the battle, Wallace was given the title of Guardian of Scotland, and he continued to serve until his defeat in the Battle of Falkirk in 1298. He evaded capture until 1305, when he was handed over to the English and tried for high treason.

Following his trial, Wallace was hanged, drawn and quartered in London. He has become one of the icons of Scottish history, and features in poems, books, and films.

In the 19th century, as Scottish national identity began a resurgence, a campaign was started to raise funds for a national monument to William Wallace. The tower was designed by John Thomas Rochead in the Victorian Gothic style, and construction was completed in 1869.

Arriving at the National Wallace Monument

You’ll catch your first glimpse of the National Wallace Monument as you drive along the A91, its crown spire peeking up above the surrounding woodland.

The tower is 67 metres tall and is made from sandstone. It stands on the top of Abbey Craig, where Wallace is said to have watched the gathering English forces before the Battle of Stirling Bridge.

There’s a free car park at the foot of the hill, and then a path takes you through to the visitor centre and coffee house.

Entrance to the National Wallace Monument costs £10.50 for adults and £6.50 for children, concessions and family tickets are available.

But we were visiting on St Andrews Day, when entrance to the Monument is free!

Once you have bought your tickets, you then follow a fairly steep footpath up through the woodlands to the base of the Monument.

But if you don’t fancy the walk, a mini-bus runs regularly between the visitor centre and the Monument.

Once you reach the foot of the Monument, you’ll be rewarded with fabulous views out over the surrounding area.

And you can also see the Victorian sculpture of Wallace holding his sword aloft. This was created by Edinburgh sculptor David Watson Stevenson and dates back to when the tower opened.

Inside the National Wallace Monument

Once inside, you’ll find a gift shop on the ground floor along with the Keeper’s Lodge, a cosy waiting room.

If you don’t want to climb the tower, you can wait for the rest of your party in the Keeper’s Lodge. Light refreshments are available from vending machines there.

The National Wallace Monument is set on four levels, culminating in the open air Crown Spire. The spiral staircase is fairly narrow and there’s no handrail, so it can feel a little precarious when you need to cross on the stairs.

But although the 246 steps might feel daunting, your journey to the top of the Monument is broken up with three additional rooms full of artefacts, information and activities. So the walk isn’t quite as thigh-burning as it could be.

We set off up the staircase, and I wasn’t sure if I’d make it out to the Crown Spire. I’m not great with heights!

The Hall of Arms

The first floor of the Monument is home to the Hall of Arms. Here you can learn more about William Wallace and his rise to prominence in the First War of Scottish Independence.

The rooms of the tower are heated, which is very welcome on a cold Winter’s day, and there are beautiful stained glass windows in the thick sandstone walls. These were installed around 17 years after the Monument opened to the public. The windows in the Hall of Arms show the arms of Wallace himself, the Burgh of Stirling, Scotland, and Great Britain.

There’s an immersive animation in the Hall of Arms, exploring Wallace’s history and how he became Guardian of Scotland.

You can also see William Wallace’s own sword, which is 168cm long and weighs around 3kg.

The Hall of Heroes

The staircase is very narrow, and there’s a good chance that people will want to pass you at some point. There are a couple of signs, easily missed, which tell you to stand on the right of the staircase and let people pass on your left hand side.

This is definitely a lot easier than if you stand on the left and let them teeter down on the narrow part of the steps!

The Hall of Heroes tells the stories of 30 men and women, including freedom fighters, kings, poets, scientists and more.

In the photo above you can see the bust of Sir Walter Scott, the famed Scottish author, poet and historian. This room also has stained glass panels, this time depicting William Wallace, Robert the Bruce, an archer and a spearman, all ready to do battle.

The first marble bust was installed in 1886, and the first heroines were introduced in 2019 following a public vote.

The photo below shows the bust of King Robert the Bruce. He defeated the English at the Battle of Bannockburn in 1314, helping to gain independence for Scotland.

Next you carry on up to the Royal Chamber, where you can learn more about the Battle of Stirling Bridge.

This gallery takes you through some of the facts and figures about the Battle of Stirling Bridge. You can see examples of the weapons used by both sides, and learn how Wallace’s forces defeated the English.

A display shows the landscape that Wallace would have seen from his vantage point on Abbey Craig in 1297, with important landmarks highlighted.

And you can also create your own coat of arms, and see it projected onto a shield. You can have your photograph taken with it if you want!

My coat of arms is the red shield at the bottom right of the picture below.

Just one more set of stairs left to climb.

After learning about the Battle of Stirling Bridge, you step out onto the open air Crown Spire, and see the loop in the river where the battle took place.

The view from the Crown is quite breathtaking. On a clear day you can see Ben Lomond and the Trossachs in the West, and the Pentland Hills to the East. Display panels point out the main landmarks around the Monument.

And you can see over to nearby Stirling Castle, which is also worth a visit if you have time.

The view was beautifully clear on the crisp November morning when we visited. In the summer months, the view is best at the start of the day, so crowds tend to be larger in the mornings. If you want to avoid the crowds, it should be quieter if you visit later in the day.

Once back inside, you can make your way back down the 246 steps to the base of the Monument.

And you can buy souvenirs of your visit in the gift shops here and in the visitor centre. You’ll find everything from t-shirts and key rings to a limited edition replica of the Wallace sword and a range of exclusive tartan accessories.

Other things to do near the National Wallace Monument

The National Wallace Monument is ideally placed for a visit if you’re spending time in Glasgow or Edinburgh. It’s also very convenient if you’re travelling through the area up to the Trossachs or onwards to the Highlands.

The Monument is also fairly close to another well known Scottish landmark, the Kelpies. These are around a 30 minute drive away from the National Wallace Monument. You could easily visit both of these attractions in one day.

We really enjoyed looking around the National Wallace Monument, and learning more about this important part of Scottish history. It’s definitely worth a visit if you’re staying in the area, or passing through on your way to the North of the country.

The National Wallace Monument: the Details

Have you ever visited the National Wallace Monument?