Every year I cook a ham for Christmas Eve dinner. Every year I suggest trying a new recipe, and every year my family beg me to do this recipe again. They call it it the Best Ever Christmas Ham!

This post contains affiliate links – we receive a small fee from purchases made through these links. For more details, please see our Disclosure Statement.

When I cook it on Christmas Eve, I usually use a huge 3.5kg joint of meat. I’ve scaled things back a bit for this recipe, but I’ll add in the cooking times for the bigger joint as well.

This recipe is deliciously sweet, tender and very moreish. When I start cooking it on Christmas Eve, the house fills with the scent of fruit and spices and Christmas has officially begun.

I usually cook it in two stages so I simmer the ham in the morning, let it cool and then finish it off in the oven at dinner time. You can either do this or complete both stages straight after each other.

I serve the Christmas Ham with either creamy mashed potatoes (Ollie’s choice) or a gooey macaroni cheese (Lyle’s choice). Sometimes both if the boys ask me really nicely!

I add some crunchy steamed veg to the table as well, for contrast. The leftovers easily get used up over the next few days. I use them in sandwiches, pasta dishes, bubble & squeak or my personal favourite – just cutting a slice off and eating it while standing at the fridge door!

I hope you enjoy this recipe for the Best Ever Christmas Ham as much as my family does! 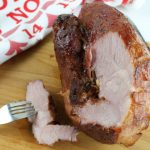 Print
The Best Ever Christmas Ham

This is perfect to cook on Christmas Eve – serve it with mashed potato or macaroni and some crunchy veg alongside. You’ll have plenty of leftovers to see you through the festive period!

Author: Sally Akins
Ingredients
For the Ham:
For the Glaze:
Instructions